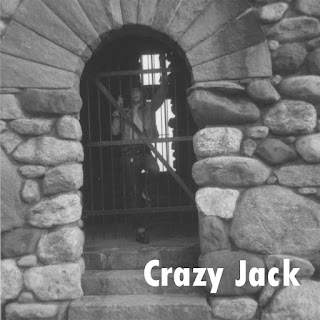 Crazy Jack, Wormtown's answer to Iggy Stooge, had a career that started out like a skyrocket, and exploded just as big. His real name was Mike Rizutti, and  I met him through a friend named Ray Gagne (whom I sadly just found out passed in July) and the group of kids who use to hang around the Thompson Pond area, out in the boondocks of Spencer. He was just like the rest of us, living our version of "That 70's Show", drinking, smoking and listening to Rock n Roll. His idols were Mick Jagger, Steven Tyler, and he always wanted to be the lead singer in his own band. Along came punk rock and everyone could do it, so he did.He formed Crazy Jack and Heart Attaxs along with Preston Wayne of Hooker, and Cathy Peters, now Cah, and David Iacovelli who played bass and drums in The Blue Moon Band. He went on to make a name for himself with wild shows that often ended in total chaos. The Heart Attaxs disbanded due these incidents and he quickly recruited some young talent in brothers Steve and Paul Aquino, and went on as the Auotmatics. This is about the time I lost touch with him. Let's just say he had ego problems and leave it there. There were more stories of  wild gigs, in Boston were he "Smashed Glass" outside Cantone's one night,  more arrests, jail time, and that's were the career ended. The last time I saw him was a chance meeting in 1991, married with children, cleaned up and sober, not missing his former notoriety. This song I have no information about, except that it features Bob Peters and David Iacovelli from the Blue Moon Band. It was found on and old cassette tape I've had for 40 years with other Crazy Jack songs recorded at rehearsals.  At one point he took these tapes from me and wouldn't return them . I had to trick him into getting them back by having a mutual friend ask to borrow them. Otherwise I don't think they would have survived to this day. The song is raw, over modulated and like nothing else he did. You'll either love it or hate it, but listen to it a couple times and it'll be stuck in your head for days.

Listen HERE! CrazyJack, Dynamite Disco
Posted by LB Worm at 11:24 AM No comments: