Love It, Hate It, Eat It

The 40th Anniversary date has come and gone, but we're still celebrating. Worcester Mag finally weighed in after all the hype, coming out for it?, I guess? Hard to tell. Hank Stoltz had a poll on his "Talk of the Commonwealth" page, where the haters won by 14%. 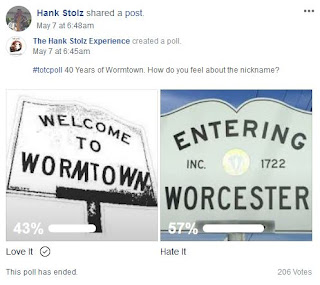 Over the years, the detractors helped popularize the moniker just as much as the proponents did. Former Mayor Jordan Levy still doesn't get it, but we never thought he would. The Worcester Telelgram and Gazette thought it was over back in 1982 after the Centrum opened and that building was going to revitalize Downtown. How'd that work out for you? 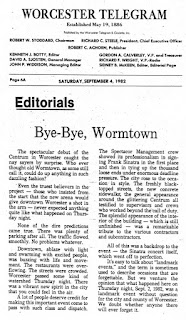 Now with Worcester on it's latest rebirth, people want to move away from it screaming "WOO!" all the way. It may not be as prevalent as it was in years past, but shows no signs of going away. Thanks to all who fly the flag of  Wormtown!  And for those who don't, long may you squirm!
Posted by LB Worm at 11:43 AM No comments:

As you may have seen, our anniversary made the local media rounds this week. Even though there is no official celebration party planned as of now, the folks who inform wanted to know what the hoopla was all about. Well, most of them anyway, still crickets over at Worcester Mag, as it was when we celebrated the 35th, they showed no interest. For those who do care, here's the links in case you missed them.

...and here's the link to the WURN "Wormtown 40th" show I did recently with all the local classics I could fit in 3 hours. 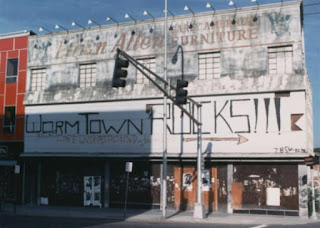 As we continue to celebrate the Anniversary the City of Worcester never asked for, we remember a  period of time when we had a friend in City Hall back in 2003 in then Mayor Tim Murray. He was dubbed "the  Boy  Mayor" by the media and being the young, forward thinking person he was he embraced Wormtown as a positive for the city, something that had never been done before at 455 Main St. Former Mayor Jordan Levy was known to have a distaste for the moniker, which only pleased the fans more. But Tim was different. He stopped down to WDOA for an interview without hesitation even though we were not perhaps them most legitimate radio outlet at the time. And when it came around to the 25th Anniversary of our scene, he had an Official City Proclamation drawn up to recognize our efforts. He stopped by Ralph's Diner later that night to read it to the crowd and join in the celebration. He mingled with the crowd a awhile and had a great time with everyone. After his term as Mayor was over, Tim went on to serve as Lieutenant Governor of Massachusetts under Deval Patrick, and now is the current President and CEO of The Worcester Regional Chamber of Commerce. Things went back to the way they used to be with City Hall. I was once introduced to the current Mayor, Joseph M. Petty at a function held by Hank Stoltz, he seemed unimpressed. Wormtown, I'm sure, is not part of their current plan to revitalize Worcester. 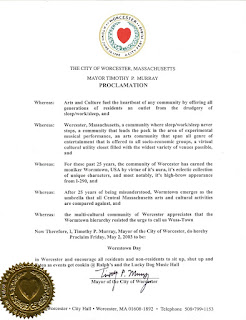 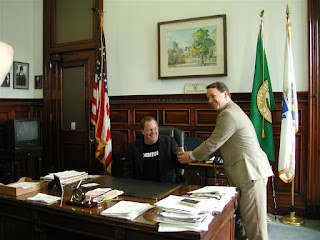 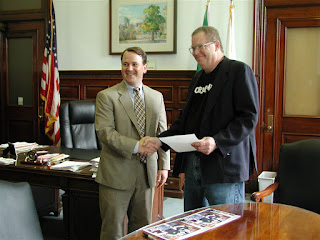 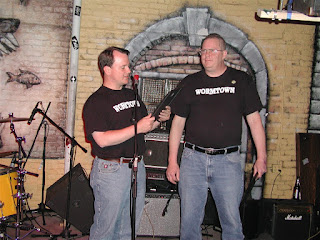 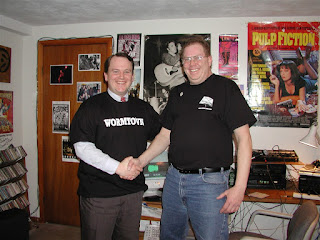 It all started 40 years ago today when the Wormtown Punk Punk Press Issue #1 hit the streets. The delivery method was either at a gig at Circes Bar and Grill on Franklin St. or via Paperback Booksmith in the Worcester Centah. It was crude, hand written, 1 sided sheet documenting the burgeoning scene in Worcester, and the name stuck like a piece of ABC gum to the bottom of your shoe. The city hated it, the media shunned it, the kids loved it. Along the next 40 years we had our ups and downs, bands used it as a rallying point to further their careers, the rest of the world took notice and it turned up everywhere from the Boston Globe to Village Voice. It waned slightly in the mid 80's only to come roaring back with a new crop of bands in the 90's. Nowadays, it resides in nostalgia and a brewery that shall not be named. No matter what the powers that be tried to counter with, it has stuck around and is not going away anytime soon. So Happy Birthday Wormtown, go buy yourself a Narragansett Beer, the OFFICIAL beer of Wormtown! 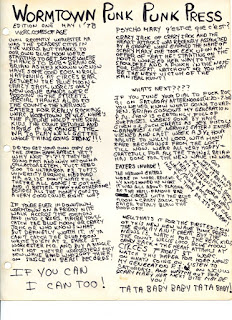