Off for a while, stay tuned... 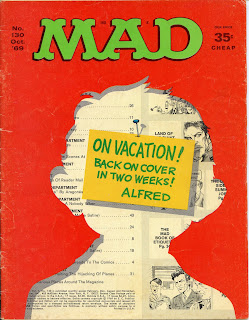 They rocked well into the night over at The Diner on Saturday. Here are some videos to prove it. Warning: MuscleCah cannot be contained by a flip cam, and Jenny Creep just might be NSFW. And Angry Johnny, well, I don't need to tell you how the Killbilles are. I'll let Capt. PJ explain it.

and as always, MORE HERE!
Posted by LB Worm at 7:16 AM No comments:

Well, afternoon any way.
Get down to the Diner for more now! 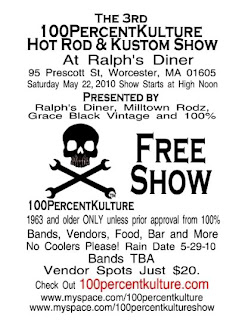 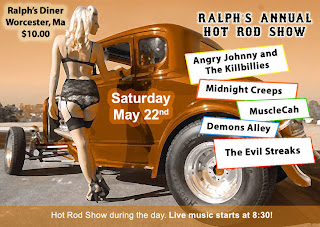 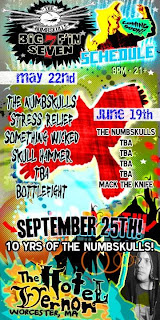 Rev it up and go this week.
Saturday at Ralph's it's the Annual Hot Rod Show. Starts at 12 noon and runs all day and night. During the day it's FREE and you'll be able to view the rods and hear some live music outside while drinking ice cold Gansetts and eating those famous Burgers. At night the action moves upstairs with Angry Johnny and The Killbillies, Midnight Creeps, MuscleCah, Demons Alley, and Evil Streaks!!
And if that wasn't enough, The Numbskulls are across town at The Hotel Vernon with their monthly "Big F'n Show 3" series along with Something Wicked, Skull Hammer, Bottlefight and more! So, you'll have to flip the old mental rock n roll coin yourself. It's a tough call.
Posted by LB Worm at 9:34 AM No comments: 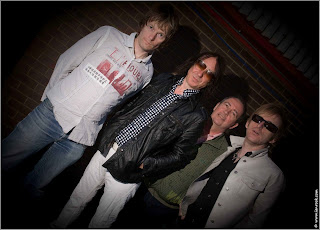 I totally forgot about this. The Buzzcocks, punk rockers extraordinaire, are playing at The Paradise in Boston Tonight. I so wish I was going.
I've seen them a couple times, once for free at Clark University and they are always spot on with their fast sharp songs about love and life. One evening Pete Shelly spent the entire night at the studios of WICN for an interview during a solo tour years ago. I have that on tape somewhere. I always thought they were the punk equivalent of The Beatles, and paved the way for countless others who play pop/punk. If you can, GO!
Posted by LB Worm at 7:17 AM No comments:

Moose and the Mudbugs

Oh, and Psycho the Kitty is just fine, No Obamacare for him though.
Posted by LB Worm at 10:23 AM No comments: 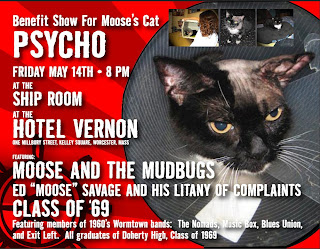 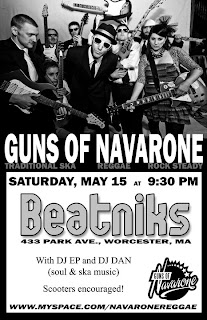 One show of note this week, Moose and the Mudbugs, legendary Boston area band is back together and playing a benefit for Moose's Kitty, Psycho, at the Hotel Vernon on Friday. Although originally from Wormtown, Ed "Moose" Savage made a name for himself in Boomland during the mid 80's heyday of Boston Rock playing in all the best clubs, with all the great bands of the time. Now, he's returning to his hometown on the heels of a couple of gigs in Boston to show you what you've been missing. Also on the bill are Moose and his Litany of Complaints and The Class of '69, an all star line up of former Worcester musicians getting together for the cause. Get there early, help out the poor putty-tat.
Saturday, over at Beatniks on Park Ave, it's a "Night of Navarone", with the Guns of Navarone. Skank till you drop.
Posted by LB Worm at 7:16 PM 1 comment:

Up now on WURN.ORG, Deadbolt, recorded live last Friday. The Whole thing, unedited, as it happened. OK, I paused it once while the band took a piss. Listen now! 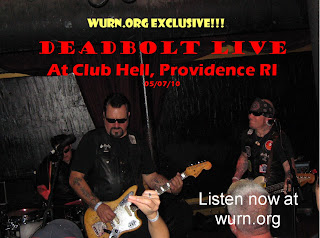 The show in Providence Friday was great. The Evil Streaks opened, followed by King Sickabilly, who were both perfect openers for this gig. Deadbolt filled the house with the sound and attitude I've become accustomed to from them, despite being down one member in RA MacLean. Got to hang out with them for a bit after the show, and I don't want to wreck their image, but they are great guys and not really that scary at all. I recorded the show for a future net-cast, with their permission. I also got the chance to pick up a copy of their latest CD, "Voodoo Moonshine", that is only available at the shows for now. In the meantime here's a video.

The flipcam had a slightly rough time with their bass heavy sound, but there are a bunch more to watch on Youtube. 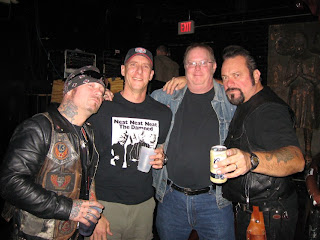 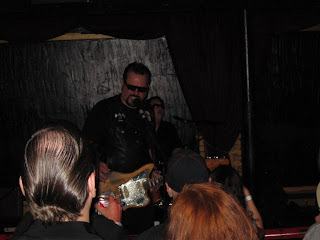 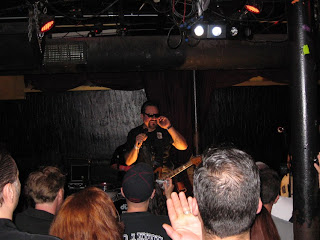 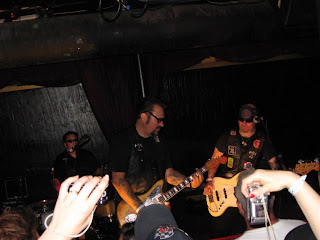 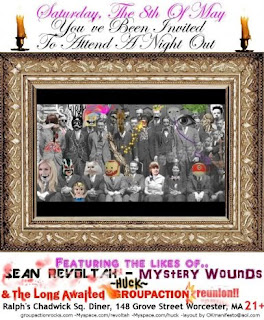 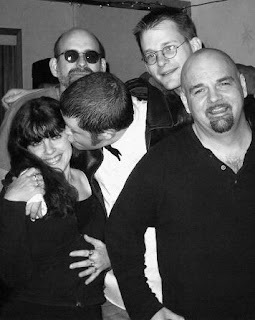 Friday, an Out Of Wormtown Experience at Club Hell in Protown with Deadbolt!
Big show this week at Ralph's on Saturday Night. GroupAction is having their long awaited reunion. Featuring Wormtown's own Action Woman, Deb Auchery, Heinrich von Schtupp, and Rev. Sean Revoltah. They have been off the scene for 4 or 5 years and have been rehearsing tirelessly to please the fans.
Also on the bill are Huck, Mystery Wounds, and Shawn Revoltah. So that's where it's at, on that end. Too.
Sunday, is Mothers day so take it easy. You know how much your Mother hates it when you drink. And happy day to all you Mother..s..
Posted by LB Worm at 9:18 AM No comments: 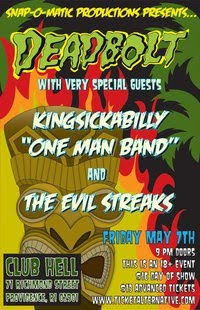 This Friday, Club Hell in Providence host "The Scariest Band in the World". From San Diego, California, it's Deadbolt. I first discovered this band by accident. I was Christmas shopping at Media Play at The Worcester Common Fashion outlets, (shows you how long ago it was!), waiting in line to check out, and on a rack of close out discs was their debut CD "Shrunken Head". By the look of it, I could tell they were different. Their music is like the soundtrack to every 60's Horror B Movie, with lyrics to match. As the years went by, I searched out more recordings and eventually got a chance to see them in NYC, when Mike Malone picked that city as a destination for his bachelor party. We had a choice between them or the Fleshtone's. We made the right choice. That was the last time Deadbolt played in the area and I swore I'd see them the next time they visited. They usually play around the west coast and travel to Europe, and are currently on a US tour which has caused some controversy within the Deadbolt community. Just last week, founding member, Bass player RA MacLean quit the band after a "disagreement" with drummer Bad Time Charlie. What this means for the future of the band, I don't know. But I plan to see them now while I can, you should too.
Also on the bill are Evil Streaks and King Sickabilly. Show of the year, so far.

If you're on facebook, there are more, better quality videos. Search for them, if you dare!
Posted by LB Worm at 10:42 AM No comments:

Just a reminder, lest you forget, PiL is in Boston on Tuesday and Wednesday this week at The Royale, which I think is the old Roxy in the theater district. They have been traversing the country, playing to packed houses, appearing on national TV, playing the biggest festival of the west coast, and now it's our turn.
Take a look at what you're in for... 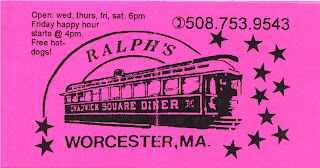 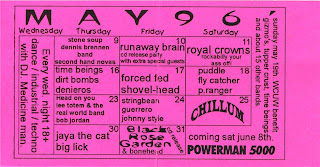 from the archives. What ever happened to the free hot dogs???
Posted by LB Worm at 9:58 AM No comments: 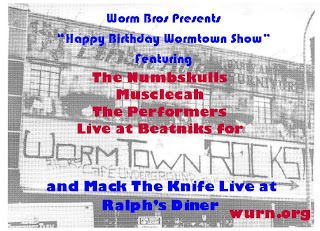 It was 32 years ago today The Wormtown Punk Punk Press issue #1 hit the streets of Worcester. I can't believe it's lasted so long. You can celebrate by listening to The Wormtown Birthday Show on wurn.org. It features The Performers, The Numbskulls and Musclecah recorded live at Beatnik's at the After Party for Wormtown Rocks! exhibition at the Worcester Art Museum, which runs through May 14th, and Mack the Knife, recorded at Ralph's on April 23rd. Happy Birthday to you, Wormtown!!!
Posted by LB Worm at 8:21 AM No comments: