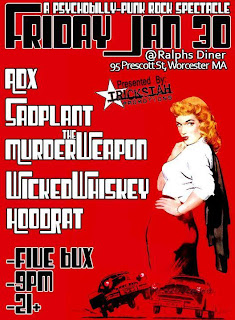 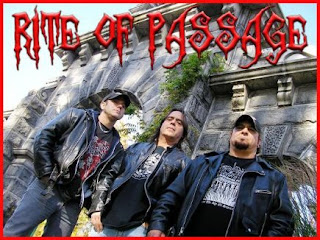 Punk Rock Friday at Ralph's Diner. Go out and get down with Sadplant from Connecticut, The Murder Weapon, Punk/ Psychobilly from Maine, Wicked Whiskey, more punkabilly from Boston, Hoodrat , good old fashioned punk rock from Wormtown, and a band called ADX which I can not find any info on , unless they are from France.

A note on Ralph's booking. Dickie, every ones favorite booking guy , has left Ralphs' and is no longer booking bands. After years of providing the club with "talent", he was let go, a victim of the new economy ? Anyway, the new person is "Danielle Freudenthal , Booker/Talent Buyer" and if you want to play there , contact her. What is a talent buyer anyway? What talents does she buy? I know some people with talents, and you could probably rent them , but I don't think you can buy them. Go to Ralph's Myspace for more info and see the"talent" she's got lined up for the future.

A note from Chris Cah, another band he uses his "talents" in are playing The Lucky Dog on Friday and are called Rite of Passage which he describes as Satincore. They are on the bill for the Jagfest preparty. Which leads me to ask, when is the Jagfest?

Also of note, Saturday is the last day of January. Go out , have a drink and say "Fuck Off!!!" to one of the coldest , snowiest, months of the year. February is short , then we will be looking forward to springtime soon. I hope.
Posted by LB Worm at 7:49 AM No comments: 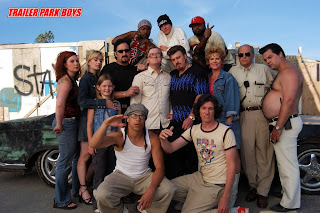 With all this time on my hands due to unemployment, I've had a chance to meet interesting new people, like Ricky, Julian and Bubbles. They are residents of Sunnyvale Trailer Park. Along with a great cast of characters, they drink, smoke, break the law, and try to survive in their little corner of the world with hilarious results. This show makes "My Name Is Earl" look like a Disney Production.
I may be a little late to this party, it's been on in Canada for seven seasons, and has had a full length movie released, but if you have some time to kill , why not drop in for a visit. Start here, but watch out for Park Superintendent Lahey.
Posted by LB Worm at 6:27 PM 1 comment: 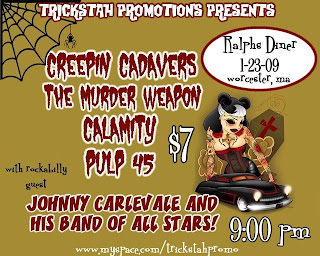 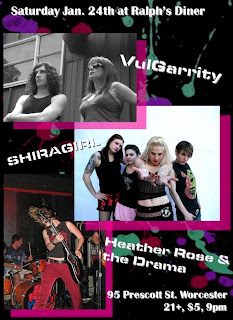 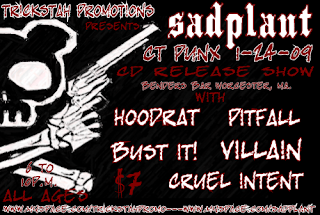 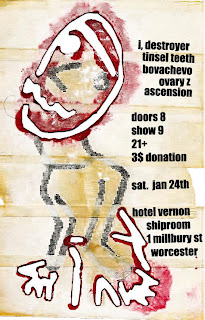 Chock full of shows this week. It may be the dead of Winter, but you'd never know it by looking at all this action. There's Roots and Rockabilly at Ralph's on Friday, followed by alterna/inde rock on Saturday ,an all ages bash at Benders on Park Ave and "I don't have a clue" at The Hotel Vernon on Saturday. But, since I'm too lazy to post links to all these bands, I'll just post the flyers and if you want to, you can go look them up yourselves. No good lazy bastard. I have a party to attend at the former WDOA Corporate Office so , I will not be attending any of the Saturday shows. Have one for me.
Posted by LB Worm at 2:17 PM No comments: 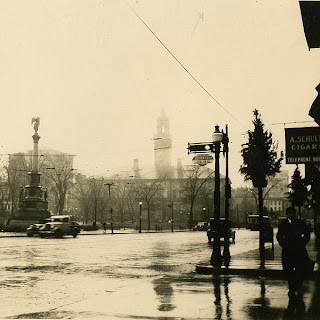 I found this picture on the interweb. It said it was taken on Thanksgiving Day, 1935. Way before I was born. Recognize the spot? I love finding old time stuff like this. It makes me wish I had a time machine so I could go hang out at that cigar shop and have a good smoke. I bet you could get a good Cuban back then.
Posted by LB Worm at 6:38 PM No comments:

What a great time at Ralph's on Saturday. Wormtown Rocked to the ska sounds of this ever expanding group , who are now up to 10 members. Watch the video as they do "The Zombie Jamboree"

Opening the night were The Swaggerlin' Growlers. They also were alot of fun. Here they are performing "Kiss My Ass" from their disc, The Bottle and the Bow.

You can got to my main page and watch in high quality, which I recommend.
Posted by LB Worm at 12:15 PM No comments: 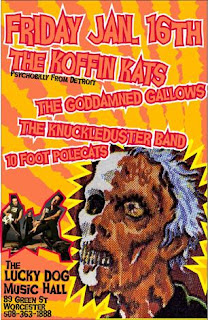 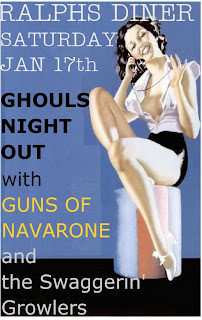 One degree below zero. Now, that's cold. Why not huddle up to some warm bodies in the clubs of Wormtown? Tonight over at The Lucky Dog, it's The Koffin Kats, from Detroit Rock City. Check out their page for a preview of some wild psychobilly tunes.
Tomorrow, two choices. You can sail the icy waters of Kelly Sq. over to The Ship Room at The Hotel Vernon for a metal/grindcore show hosted by Can't Kill Katie and featuring Reign of Pestilence, Leecheater, and Hannaford and the Heartstoppers.
Over at Ralph's' it's The Guns of Navarone, skankin' up the place along with Ghouls Night Out and The Swaggering Growlers from Allston Rock City, for a diverse bill of Ska, Rock, and Celtic Punk.
Rock Cities Rule this weekend. Wormtown Rock City. Sounds good to me.
So make sure your anti freeze is full, batteries are charged, and your dipsticks are plugged in for a cool time. We're in New England. We can take it. Five months from now, we'll be complaining about the heat.
Posted by LB Worm at 9:01 AM No comments: 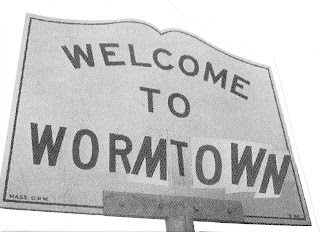 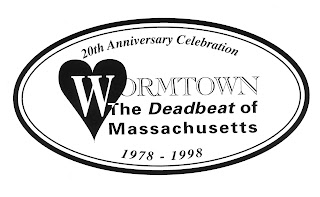 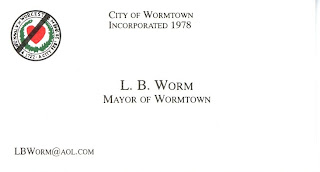 As I mentioned a couple days ago, I've always had fun at the City's' expense when it came to their marketing gimmicks proposed to sell Worcester to anybody they thought was buying. I know, a lot of work went into these projects, even one that was designed by a former co-worker who would probably try to sue me if she ever saw my take on her creation. I think the statue of liberty ran out on that though. And so, here are some of the Wormtown Campaigns I created, thanks to them.

It's January, and believe it or not, it's fuckin' cold out.
Here's a video from the last vacation I took.
That one was by choice. 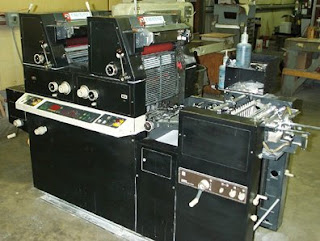 Yeah, it hit home today. After five and a half years of running a press just like this, I was let go from my job. I was responsible for printing signs and forms for 36 retail clothing stores throughout the eastern half of the USA. Well, make that 26 stores now, since they're closing ten in the coming months. It was a one man operation, and I was it . Keeping up with impossible workloads, last year I printed over 1 million signs. Then today, of all the ironic twists, I was laid off just as I was half way through printing 15,000 job applications. I cleaned out my desk, deleted my files from the work computer and bid adieu to the job I thought I'd retire at. Welcome to 2009. Obama, can you spare a dime??
Oh, and I finished the job too.
Posted by LB Worm at 7:29 PM 2 comments: 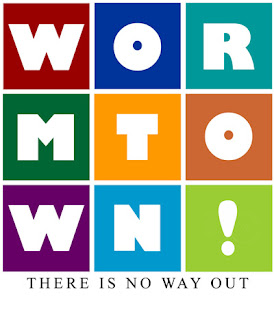 WOW, it's been a year already for this blog. Where does the time go. I originally started this to chronicle the 30th Anniversary of Wormtown, but decided to keep on going after the party in May. The logo I came up with for that has proven to be the most popular parody of Worcester Marketing that I've ever co-opted . So, now, I've dropped the 30th off of it and added an exclamation point to emphasize that this is where it's at, Wormtown here and now!
Now to celebrate the Blog Birthday, here are some videos from the other night at The Lucky Dog. First is Wormtown Band of 2008, The Pathetics, and two from Sasquatch and the Sick A Billys. They both played to a packed house , and Sasquatch says it's the last time The Sick A Billys will be in Wormtown for a while. He said he'll be back in a couple months with a wild Metal Band he's planning on starting. 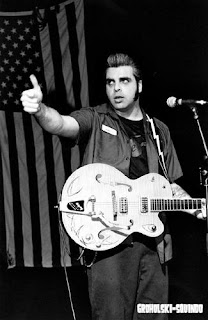 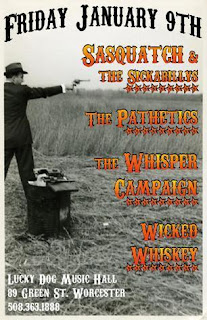 Wild times are coming this week. The Lucky Dog,on Friday is the only club in town with enough balls to book Sasquatch and the Sick-a-billys. This band has been asked not to return to many venues throughout it's career, and you can go to Green Street and find out why. They are on the bill with the Wormtown Band of 2008, The Pathetics! It will be a sick evening.
Meanwhile over at Ralphs, one of the clubs that refuses to book Sasquatch, Jamie Severance and his Fighting Cocks are headlining. You may remember Jamie from his old Wormtown band Unattached. So , flip your mental rock n roll coin and decide which show you want to witness.
Posted by LB Worm at 7:06 PM 1 comment: 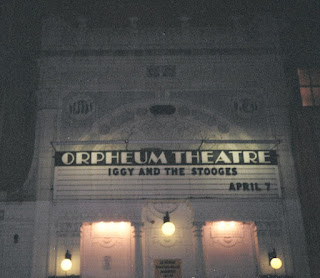 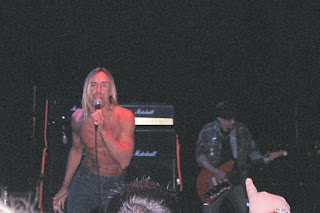 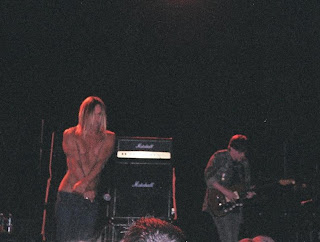 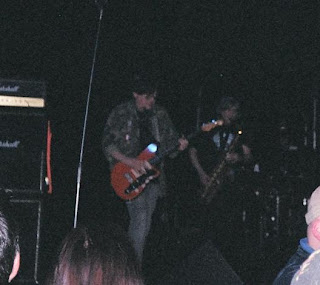 News today that Ron Asheton, guitarist for The Stooges passed away of a heart attack. The band that started it all back in the late 60's early 70's, and Ron Asheton became a guitar hero to everyone who desired to pay loud , raw rock n roll. The Worm Bros had the opportunity to see them up close and personal in 2007 and here's are a few shitty pictures of that night.
Go visit Rons' myspace page and leave your thoughts, and check out The Stooges page for more music from this punk pioneer. 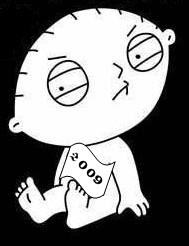 After 2008, the new year ought to be as nice as Stewie Griffin, so he's my New Year Baby.

Why not start off on the right foot with the shod foot. Kick off the new year this Saturday night over at The Hotel Vernon, there's a big, diverse show with Can't Kill Katie and Hoodrat who host two bands from Virginia Beach, J Karner and the Petersen Bros and The Fastermores, PLUS from Portland ME, Lead Stiletto. The Vernon gets my vote for Bar of the Year in Wormtown for it's line up of punk shows, cheap gansetts, and no cover. How can you beat that?
I would guess in the year ahead they will continue with more.

Bummer of the year: Ralph's Passing.

Show of the Year: DUH! The Wormtown 30th Weekend in May '08 was IT! Wormtown Bands from now and then made Ralph's rock like it hasn't in years! And I heard, The Odds will be back there in March.

Band of the Year: The Pathetics. Releasing two CDs and playing more shows in a year than they probably played in their life, these bastards get my vote. Expect more drunken follies in '09.

Invasion of the Year: The Wormtown Beetles. The Unfab Four Million. That's either the number of them, or the down payment to get rid of them.

Sale of the Year: Womag. What a Landmark this was. Watch it now as it slowly becomes irrelevant.

Pipe dream of the year: A tie. The Blackstone cAnal Repro. Yeah, let's see The Gubmint give you the money to build that now. And Shitty Square, do people really still believe that they will knock down The Galleria? Why not just use it for a Homeless Shelter. PIP with a view.

Radio Station of the Year: WTAG. What? Well even though WCUW got new management, transmitter, online streaming, 'tag lead Wormtown County through the worst natural disaster in more than 50 years with info and updates and letting residents air their complaints.

And finally, Website of the year: Wormtown Taxi. If you really want to know a city, ask a cab driver. Jeff has done a great job, it's the only site I check multiple times a day.

Sorry if I forgot to mention YOUR special contribution to life in Wormtown. Why not try harder this year.
Posted by LB Worm at 11:49 AM 1 comment: