This ain't the summer of love 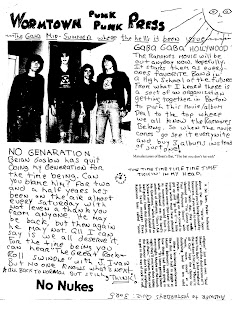 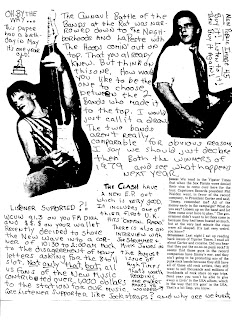 This is only listed as the summer issue.
It must have been a good one.
Neighborhoods and LaPeste in the WBCN rumble
Ramones in the movies
Goslow quits WCUW The Clash release a new EP
And Wormtown was one year old
Posted by LB Worm at 8:20 PM No comments: 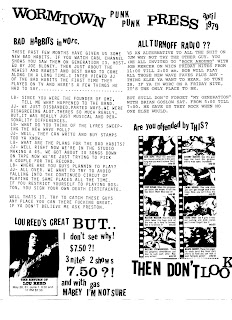 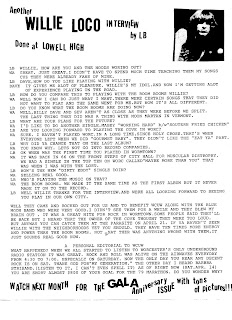 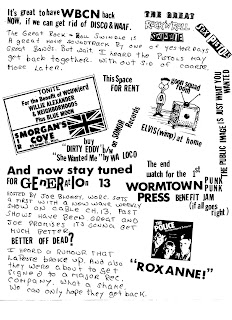 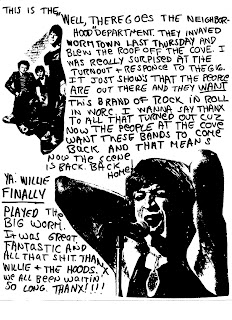 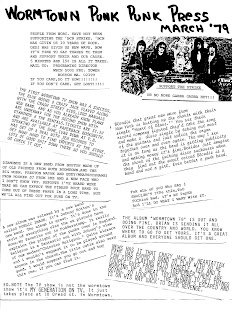 Boy this looks like crap. I don't have printed copies of all the issues , so sometimes I have to scan the originals. Technology of 2008 isn't as forgiving as it was in 1979. It sees all the paste up marks. Back when I was writing all these I worked in a print shop downtown, so I had access to presses and cameras that would do the job just fine. As long as the boss didn't find out I was pilfering supplies. So sometimes it will look like this, but that's what it was all about. Not pretty, never vacant.
Posted by LB Worm at 6:33 PM No comments: 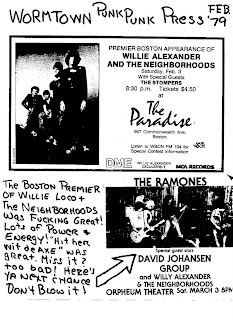 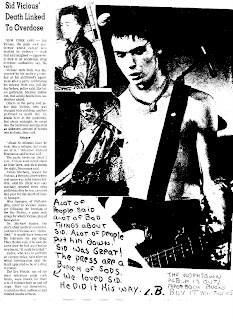 Willie Alexander and the Neighborhoods teamed up in Boston, and our friend Sid Vicious, awaiting trial for the murder of his girlfriend Nancy Spungen, overdosed in New York. Thus becoming the first punk rock casualty. It was truly a tremendous loss. Only 21 and and snuffed out in his prime.
The world would never know if he really was guilty. But Hollywood made the movie anyway. Go rent Sid and Nancy, and you be the judge.
Posted by LB Worm at 8:15 PM No comments: 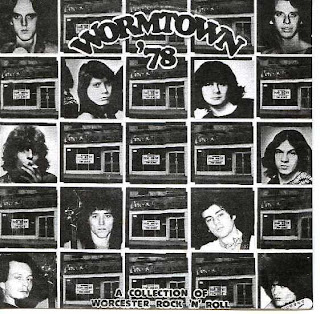 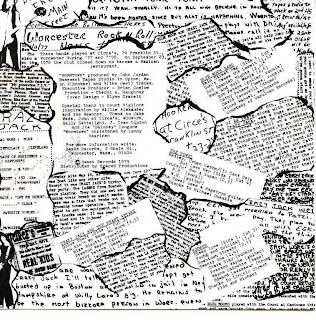 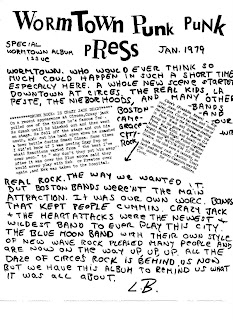 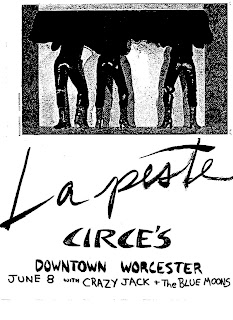 The January 1979 issue was only available with the Wormtown 78 record.
It was mostly recorded in 1978 at John Jordan's Basement Tapes Studios in Upton MA.
It featured The Blue Moon Band, Crazy Jack and the Heart Attaxs, The Towel, and Hooker.
I have scanned both sides of the LP so you can read all the details.
A very limited edition, occasionally it shows up on eBay selling for hundreds of dollars.
It was our testament to the world, proof that Worcester had carved out it's own place in the punk rock explosion.
You can sample some songs on the Worm Bros Myspace page.
http://www.myspace.com/thewormbros
Posted by LB Worm at 7:41 PM No comments: 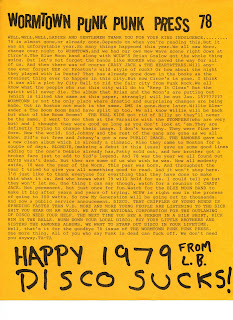 What a year. That's how it all started.
Posted by LB Worm at 7:54 PM No comments: 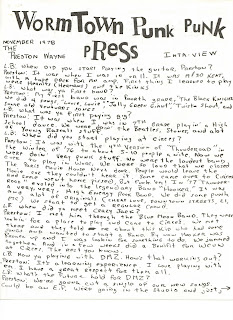 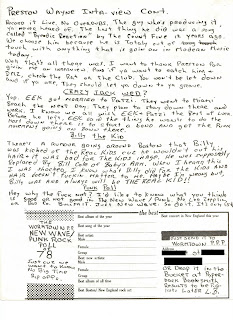 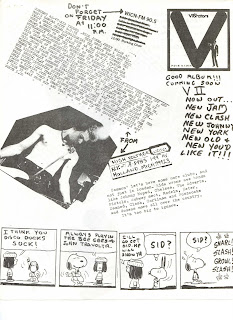 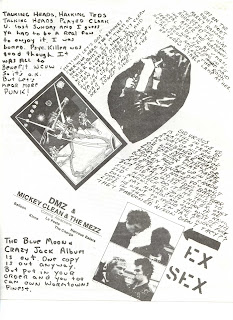 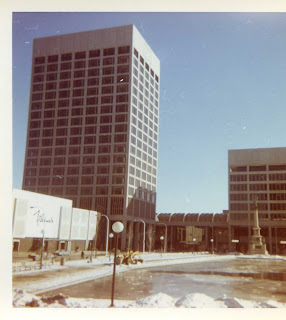 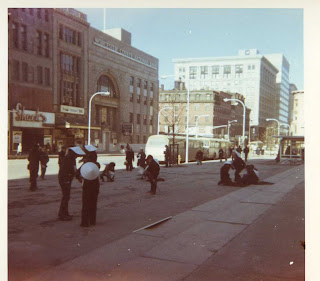 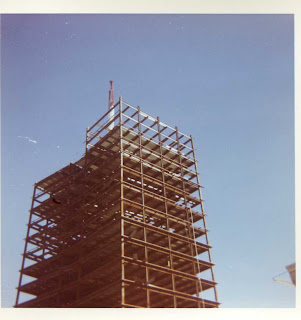 Before there was Wormtown, there was Worcester.
In younger days, I only came here to visit my Aunts, Uncles, Cousins and Grandparents.
Being from a small suburb, it was the Big City to me.

One of the first times I came on my own, I brought my Kodak.
This is what I saw.
Christ, they were protesting against the War in Vietnam in front of City Hall.
Notice the buildings on the left, they're gone now. WCNB and Shack's,today still on Main St. further down now on the right.
And the glass tower at 446 Main St was still being constructed.
Posted by LB Worm at 11:06 PM No comments: 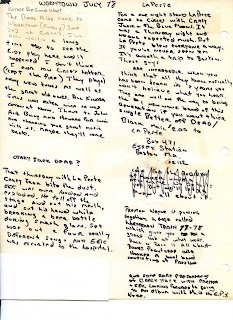 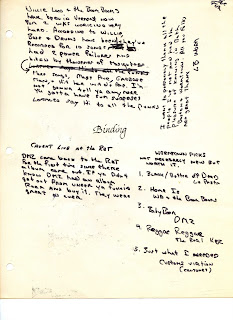 Guess it was a good summer back in '78
Couldn't even finish an edition.
What a month. Real Kids, LaPeste,
and Crazy Jacks' meltdown.
missed that one.
Posted by LB Worm at 7:54 PM No comments: 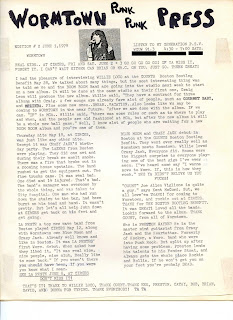 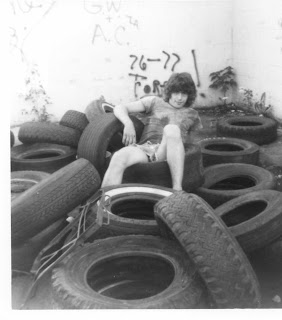 Here is a photo of Legendary Wormtown performer, Crazy Jack.
I first knew him as Mike Rizutti back in the mid 70's.
We were the best of friends.
He became known for wild antics both on and offstage with his band, The Automatics. They followed The Kuntry Kastinettes, as brave people willing to share a stage with him. The gigs sometimes ended with fights, blood, or arrests, but always provided entertainment.
Along the way we lost touch, and I haven't seen him since 1991 or so.
If anyone has any contact info on him, please pass it along.
I know he's found the errors of his way since, but we all would like to hear him sing his songs once more during the 30th anniversary. 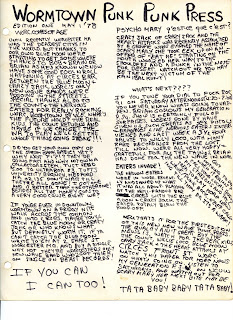 2008 marks the 30th anniversary of the birth of Wormtown. A city in Central Massachusetts formally known as Worcester. It was created as a name for my fanzine covering the burgeoning punk rock music phenomenon exploding locally, nationally and worldwide. Somehow it became the moniker for the city itself, much to the chagrin of the local government officials, citizens and others who were easily offended. Now, here we are, 30 years later, and still people have a problem with it.

Some say calling it Wormtown degrades the city and all the progress it has made to overcome its reputation as an gritty old mill town. The city has made many great advances, with the Shrewsbury and Water Street areas becoming the go-to destinations for food, drink and entertainment and the possibility of the Blackstone Canal being reborn with some sort of replica being introduced on Harding Street. But the old Mall, The Galleria, where we found punk rock 45's and lps at Paperback Booksmith, is still standing in the way of the long awaited Resurrection of the downtown area. There's new hotels, modern office space, a courthouse, roundabouts, all around it, but the "Worcester Centah" sits there a reminder of how far they still have to go.

But this isn't about that. This is about the music that was created here and spread outwards to show the world that we in fact do rock. Over the next few months I'll post old scans of the fanzines so you can see what it was like, and keep you updated on the anniversary bash to be held at Ralph's diner in May.

You can also hear the music of Wormtown and more here at http://www.wurn.net/
Posted by LB Worm at 9:25 AM No comments: