This time we go back to 2006 with an interview and live performance by Boston Punk Rock Band, Darkbuster. I conducted this interview outside Ralph's Diner in the metal carport shelter. Looking through my archives of WDOA.com shows, don't think I ever aired this for some reason. They were just off the tour with Dropkick Murphy's and was the first time the band played Ralph's. Band members gave aliases but as I remember it was Lenny Lasley, Amy Griffin, and Mike Gurley among others I can't recall.  They had just released their CD "A Weakness for the Spirits" and were on tour to promote it. Also, for some reason there are no photos from this show that I could locate, so what you hear is it. As they ran through their set and thrilled the crowd on hand that evening, it was true to what they came to represent. One of the scene's favorite bands. Enjoy! 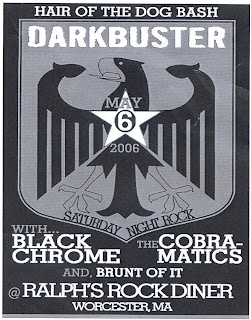